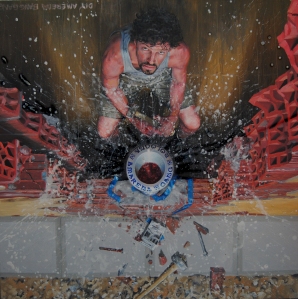 Most of what is written here is a deeply inside joke, so, in the tradition of David Foster Wallace, I’ll be footnoting extensively. (as this is a Fb rough work in progress, footnoting will come later) I live in Tuscany, and have bred two italian girls- to be exact, two half italian, quarter German, quarter English girls. Yes, those two mutt quarters are my input.  I recently returned from a trip with them ( I took them to my ancestral home in Ohio).  Last night I woke from a dream.  I know most people consider dreams to be confusing, and surrealism has done nothing to change the popular view.  I usually don’t: when I wake from a vivid dream I wake feeling, knowing, exactly why I had that dream and what it means to me.  Please, don’t send me your dreams and expcet me to interpret, it doesn’t work that way. If you don’t understand your dreams, don’t expect someone with a book on symbolism to do it for you.

A good working tittle for this essay is I’m “more italian than you,”  On my trip, I cooked pasta al ragu, (al sugo, alla bolognese) insomma, meatsauce, once for my immediate family and once for my extended New Bremen family.  In my dream, I was supposed to cook for everyone, but ended up almost eating my meal with an unknown man of apparently italian/american descent.  I say almost ate it, because he immediately got up, said “you don’t mix the sauce with the pasta”, left the table and proceeded to the kitchen to make his own sauce.  Here’s a great mix of cultural confusion.  See, my mom (decidely not italian) never mixes the sauce with the pasta, she serves the spaghetti in one bowl and the sauce in the another.  Should you go to any Italian restaurant which is serving your pasta immediately upon draining it, this is how your pasta comes, a pile of yellow noodles with a ladeled dollop of sauce on top.  But in the italian family, its always mixed before taking it to the table, to keep the noodles from sticking together. So what my would-be dinner companion says is straight from an exchange with Mom, but what he does is thoroughly italian.

No, no italian is so rude to get up from the table and make his own sauce, but this is exactly is what every single one of them secretly wants to do.  And here, for fellow non-italians, is a great word of advice:  when eating with italians, never, never, NEVER ever ever ever (I cannot ever never this point enough) never volunteer to make the sauce.  Italians are sauce people,  they have a sugo gene pumping through theirs hearts.  It is impossible for them not to know how to do the sauce better than you.  It does not matter if you learned form the greatest italian chef, or if Nonna Viola from Sicily taught you her recipe.  There is one and just one true recipe for any italian to make sauce, and that is the way thier mamma made it.  Typically, italians who have immigrated for more than one generation consider themselves to be italian, and native born Italians consider themselves italians, but its impossible for italians from any region (with perhaps the exeption of the bilingual german speaking northern zones who have for years longed to seceed) to not consider themselves more authentically italian than any other zone.  And this does not stop at a regional level.  every city is inherently more italian than the one next to it, and every neighborhood in every city is so complexly more italian than any other.  But, the soul of italianess really resides in yet another subgroup, la famiglia, the family.  Naturally, an outsider may now find defining a true italian difficult.  Not me. Its their is the innate ability to know the best way to make the sauce.

Huffington Post looks at Influence of Skype on Painting

Paul Beel encounters Skype and sees it not as a reduction of interactions he would normally have in person, but a window through which he can have interactions otherwise impossible. For him, these interactions are not categorically different from physical company. He cheekily titles the body of work Live Tonight. 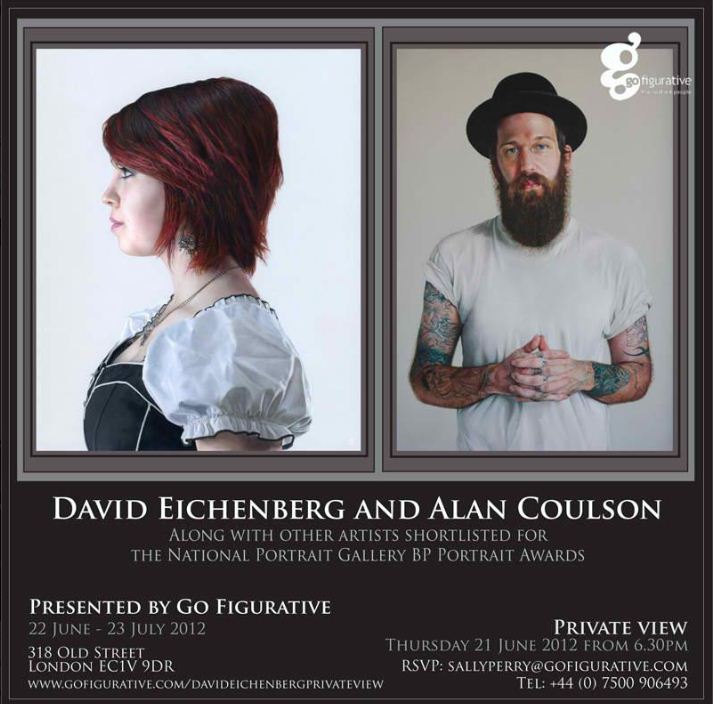 The Huffington Post just posted an interview and review of the process of Skype portraiture.

We checked out Beel’s work and were immediately intrigued by his mix of personal isolation and interconnectedness with strangers.

You can check it out, here:

Have more interest? Drop an email. 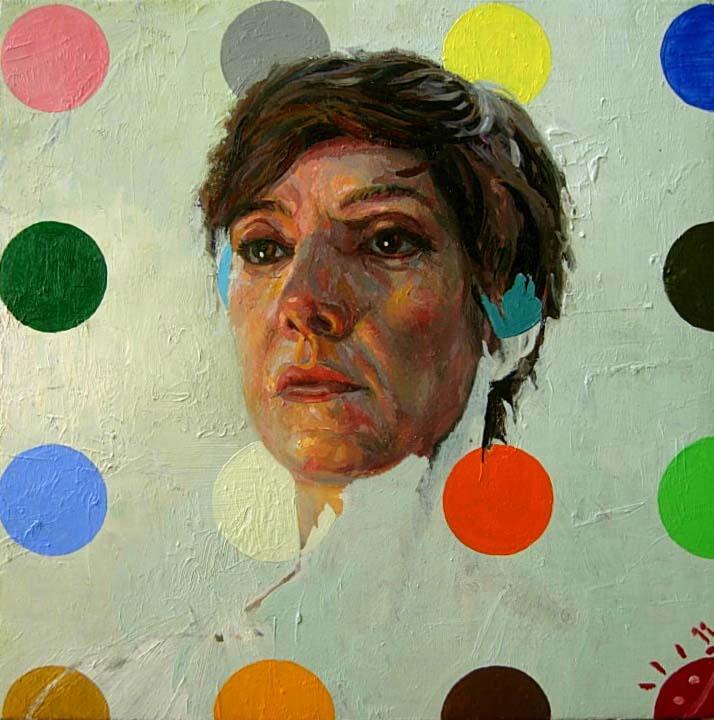 My dinner with Kostabi and its relation to Tom Sawyer.

I read recently “Ten Tips to be More Intelligent, and one suggestion  – “become an expert at something”- seemed interesting. So recently, I’ve decided to become an expert on Mark Kostabi.  Why Kostabi?  Why not?

I should say here, I’ve passed twenty years of my artistic life giving Mark’s paintings little attention.  I come from portrait roots:  his faceless, featureless heads turned me off and I failed to look for anything else.  Now that I’m a Kostabi expert, I’ve learened to look at them, and I was often surprised.  For one thing, only faces turned (assumingly) towards the viewer are featureless, those turned to profile usually have noses or even mouths.

I friended him on Facebook mostly from a dull sense of curiousity, and I found his page entertaining -it often made me laugh- , and yes, I hate to admit, surprising.  He’s been known to produce a thousand paintings a year.  OK, he has painters (its hard for me to call an adult who completely paints an image an “assistant”) but still, even if he hasn’t painted a single thing, he’s made a thousand good to brilliant drawings in a year, directed colors, and enacted quality control, that’s a lot of artistic shit to do in a year, and its comendable.  Despite much inflation of the Kostabi character in his marketing persona, he often allows for self-confession in his paintings.

Which, without segue, brings me to me and Tom Sawyer:

What’s that you got there?_ Tom

I was Huckleberry in the six grade play (should have been Tom, but thats life).  Even if in reality I’m doomed to Huckleberydom, I identify with Tom.   I know Tom in his painter pants.  I read him and imagined him and I learned my lessons well.  If Ben Hooper walks by the fence, I can talk him into picking up a paint brush and laying on some pigment.  I’ve done it.  Almost every friend I’ve had I’ve Tommed into painting something for me, and I don’t think any regreted the experience.  The only difference from Twain’s fiction and my reality is that I, unlike Tom, actually do believe that painting is absolutely the most rewarding and fun activity that one can possibly do, and therefore I never (well, often) feel that I am cheating them. Kostabi, it seems is a Sawyer who’s grown up.  He doesn’t trick his hands, he hires them.

Kostabi was showing in Florence, and I went to the opening.  It was hard to squeeze back to the wine table, where I drink spumante and could choose between straight or twisted pretzels, which I gobbled greadily all night and was grateful for.  I Chatted with Mark, discussed the market, which painting was my favorite (seated, faceless woman on Wharholian silver-leafed flowers.  I Met a few of the gallerists involved with the show.  I Looked at images. I looked through catalogs.

Speaking frankly, I’m at a point in my artist career that it’s not unlikely that if go to a show I’ll get asked to dinner.  I don’t go expecting invitation but it no longer surprises me; understand.

At a certain point, one of the gallerists noticed that some of the edges of Kostabus showed freckles of white canvas jutting from behind the frame. which, once noticed could only be considered oversights rather than aestetic statements or punctuation.  I offered to touch them up, but no one (other than Mark) took me very seriously.  The night wore on.  Mr. Kostabi was tiring, now prefering to sit while signing yet another obligatory personal autograph to a man he’s never met before.  Red dots bloomed next to paintings like tartufi, even though I’m not sure if tartufi grow quickly in the night like other fungi. He was gracious, forthcoming: great guy.  and the night wore on some more.

I left as it was obvious the reception was drawing to a close, and I didn’t want to be the last straggler left with the “dinner core”  Artist, gallerist, important collectors, were the core at the traditional after show dinner.  In a tough economy Straggling with the core is awkward, it looks like you want an invitation, and while I did want one, and was getting hungry, I also loved the allure of beef wrap from the kebab shop down the street from Santa Croce.  Mark is a vegetarian, I doubted beef kebabs would be on the menu.  Furthermore, straggling may also be taken as early-stage stalking.  One must keep claer the difference between being an expert and being a stalker.  I said my fairwells and headed out into my own adventures for the night.  I love the melancholy of these piazzas at night, and I ran into some friends, I ate my Kebab, mmmmmmmmmmm, road the last train home.

The next morning over steamy coffe I found a FB message and email that greeted me like a present on Christmas day:

Paul, If you’d like to come to dinner please call me_ Mark

So that was my dinner with Kostabi.  Anyone out there with spellcheck, please edit this and repost it to as many friends and groups as you can. 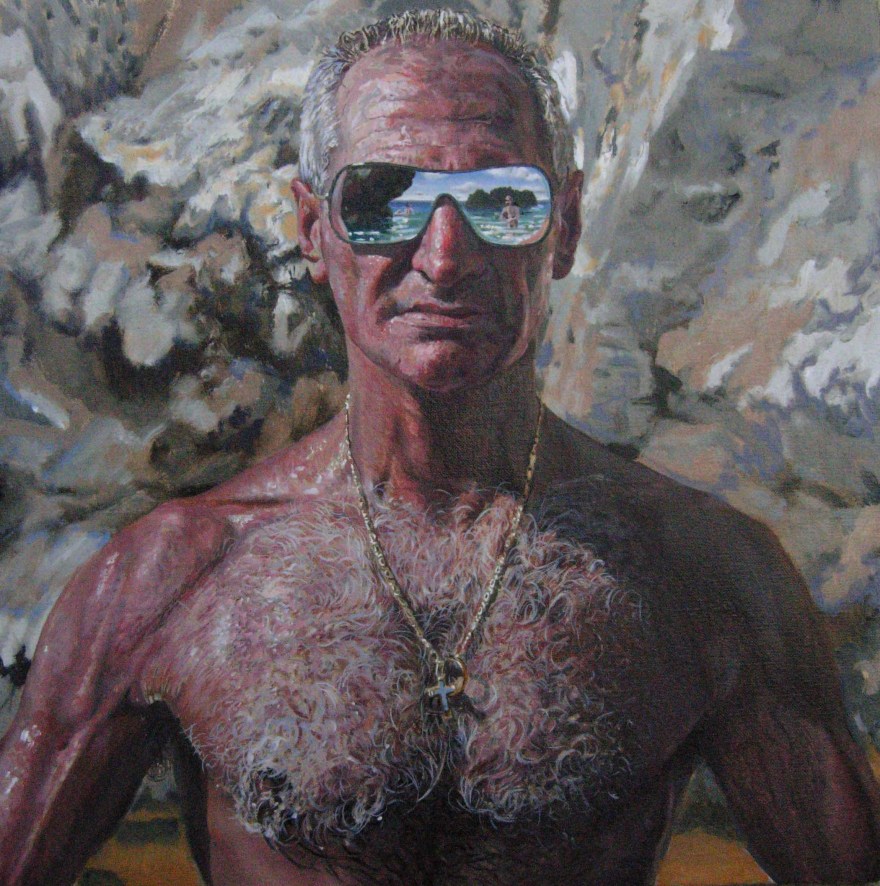